War in Space: The Science and Technology Behind our next Conflict Theater

Published by Springer. Available in paperback and Kindle on Amazon. 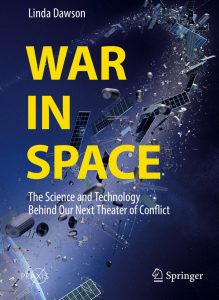 How would a war in space be conducted? Now that spaceflight and satellites have become more commonplace, the region of outer space contains vital technology used for communication and surveillance and the functioning of business and government. What will happen if these capabilities are disrupted or even destroyed? What would happen if a full-scale blackout of satellite communications occurred?  What can and has happened if a satellite is destroyed, creating thousands of fragments orbiting Earth as space debris? The vision is alarming. A historical perspective provides context for this discussion. Scenarios that could lead to crippling results in the aftermath of deliberate aggressive actions are described. Certain technologies can be used to gain power and control over countries assets as well as initiate war in the theater of outer space. The technology and science instrumental in disarming a country’s vital capabilities is investigated as well as a political discussion of what countries have these abilities and who has already demonstrated aggressive actions in space. Finally, the book also addresses the research and use of space technology to protect Earth from enemies interested in destroying a country’s vital systems.

Buy War in Space on Amazon

The Politics and Perils of Space Exploration: Who Will Compete, Who Will Dominate?

Published by Springer. Available in paperback and Kindle on Amazon. 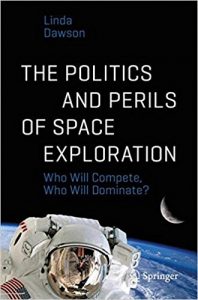 Written by a former Aerodynamics Officer on the space shuttle program, this book provides a complete overview of the “new” U. S. space program, which has changed considerably over the past 50 years.The future of space exploration has become increasingly dependent on other countries and private enterprise.

In order to tell this story, it is important to understand the politics of space as well as the dangers, why it is so difficult to explore and utilize the resources of space. Some past and recent triumphs and failures will be discussed, pointing the way to a successful space policy that includes taking risks but also learning how to mitigate them.

Buy The Politics and Perils of Space Exploration on Amazon

Show me the books!